With Konflikt ’47 just around the corner and post war 1946/47 articles appearing everywhere, conversion fanatic Jakob lotz has been carving up the kits again to bring an awesome little cat to life, plus rules for it in Bolt Action, the ‘Paper Panzer’ VK1209: 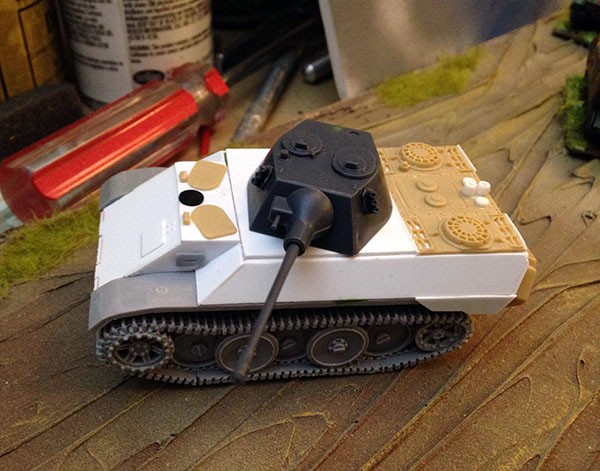 Jakob: The ”light” tank VK1602 Leopard was a planned German reconnaissance vehicle designed during 1942. Serial production of the vehicle was scheduled for the beginning of 1943, however the project was abandoned before the first prototype was built. It was originally planned to arm the vehicle with the 75 mm KwK 41, although this was eventually changed to the smaller 50 mm cannon.

The same cannon as the one used on the late Pz III’s. The VK1602 was in many ways influenced by the Panther medium tank, which is quite clearly visible in it’s design. It also had some rather heavy armor for it’s size, which is also somewhat odd given the fact that it was meant to be a reconnaissance tank. Although the VK1602 never went into production the turret was to be used on the rather well known Puma armored car instead. 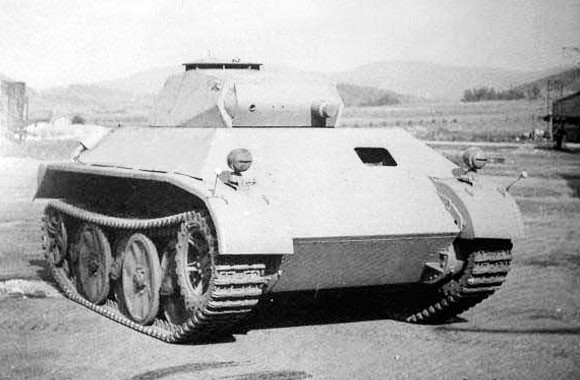 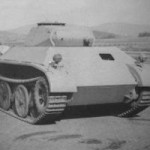 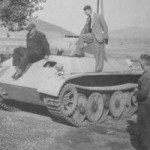 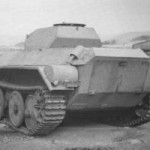 What you will need

A little Caveat before we start

I would like to point something out before we get started with the actual build. It should be remembered that the VK1602 was never really put into production and as such falls under the heading of ”Paper Panzers”. From what I’ve gathered the VK1602 was supposed to have a track assembly similar to that of the Panther tank. However I chose to build mine around the chassis of the luchs since this made the whole build a lot easier as I didn’t have to construct the entire track assembly from scratch (I also initially missed the fact that there was a difference between the Luchs and the VKs track assembly, Mea Culpa :o). Also, as can be seen from the picture above, there was at least one mock up of what looks like something similar to a VK1602 built using the Luchs as a basis.

Now I am no historian and I’ve never claimed to be one either, as such I will get certain details wrong, it’s inevitable, either because I make a decision for practical reasons or because I’m just ignorant (which of course is unfortunate). Furthermore it has never been my intention to be 100% absolutely accurate without fail. I do conversions that are intended to represent certain vehicles on the tabletop, I don’t make exact replicas. However, having said that, I still do strive to be as close to the real thing as I can.

Now as I neared the end of the VK1602 build I realised that a 1:72 scale Panther kit was actually perfect in size for the VK1602 in 1:56 scale. As such it is very likely that one can quite easily appropriate the track assembly, among other things, from said Panther kit and use it in conjunction with the Luchs chassis and thus get the right track assembly without to much hassle. Unfortunately for me I had already completed almost the entire build when I realised this so I decided to leave the build as it was, since the difference was really quite minimal in my opinion. However I felt it worth to mention that there is a viable option if someone else decides they want to make a VK1602 as well.

To start things off I cleaned all the resin parts in some warm soapy water and then washed them off and let them dry. Then I took my piercing saw and cut away the the sides of the Luchs chassis as shown below. 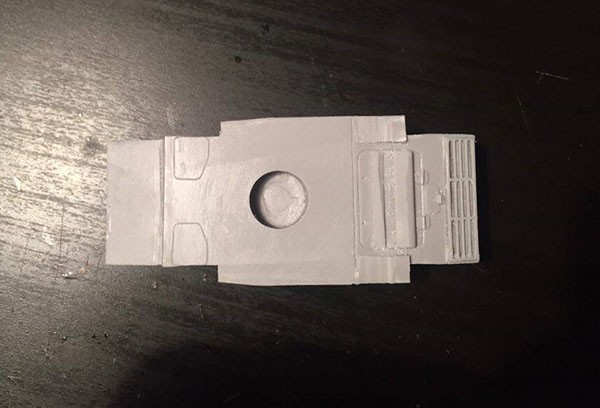 After this I cut off all the extra bits on top of the tracks until I ended up with this. (optionally one could probably use the track assembly from the 1:72 Panther kit as has already been noted above). 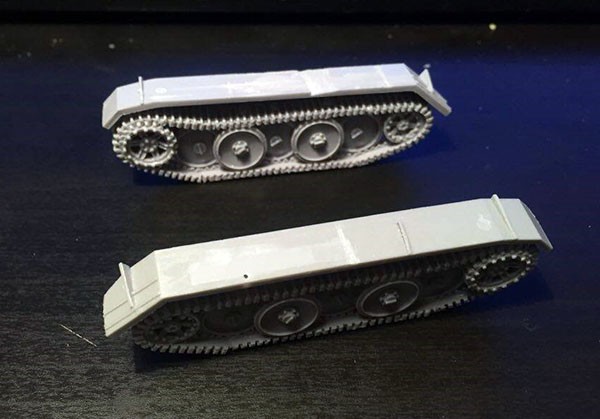 I then went back to the chassis and cut away all the bits and bobs from the rear of the tank until I was left with this. 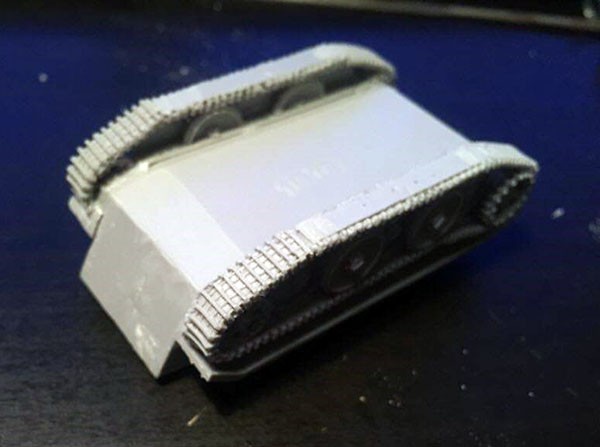 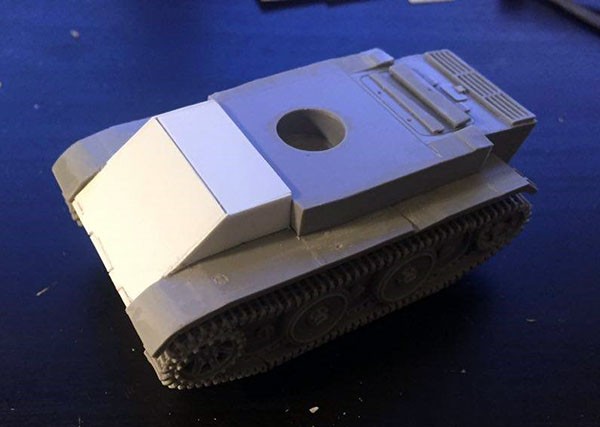 After which I added some more platicard to make the top of the chassis level again. I also added a magnet, intended to eventually hold the turret in place. 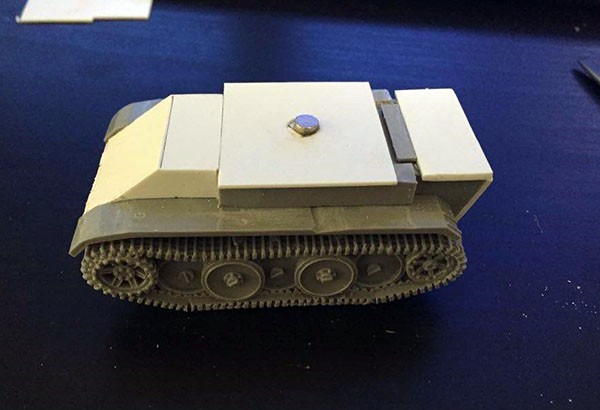 Then I made a bottom for the turret using plasticard and added a magnet there as well. 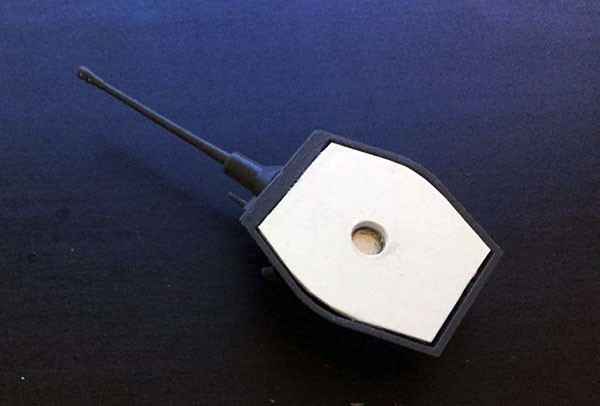 Next up was the sides. These were somewhat tricky since they are angled inwards. However using the track guards and the main hull I managed to get a rather good fit. I then added some additional pieces of plasticard to complete the structure of the hull. I also added some minor details to the front of the hull. (A tip here is that one could probably use a lot more of the 1:72 Panther hull than I did in my build. It would probably just be a matter of cutting away the front portion of the Panther hull and then placing the entire rear part on top of the Luchs chassis. Something which should save a lot of time and hassle). 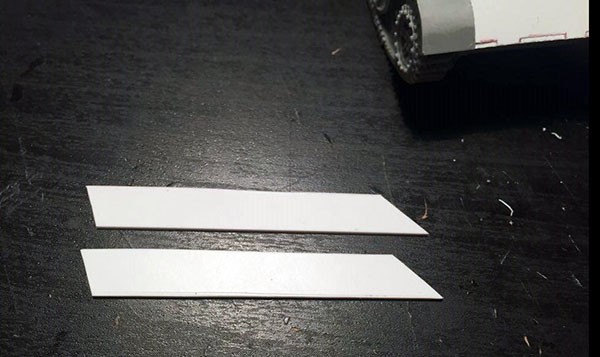 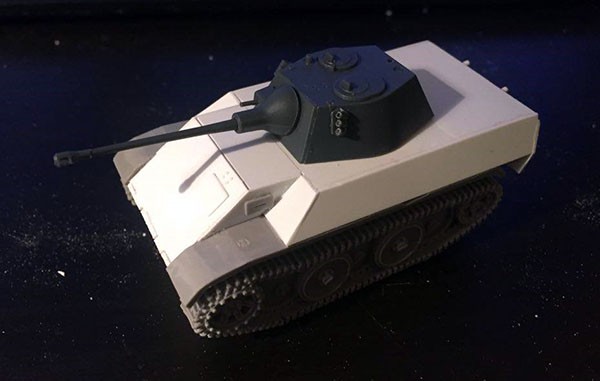 Next I added the final details to all parts of the tank, using a mix of plasticard as well as different pieces from the 1:72 Panther kit. 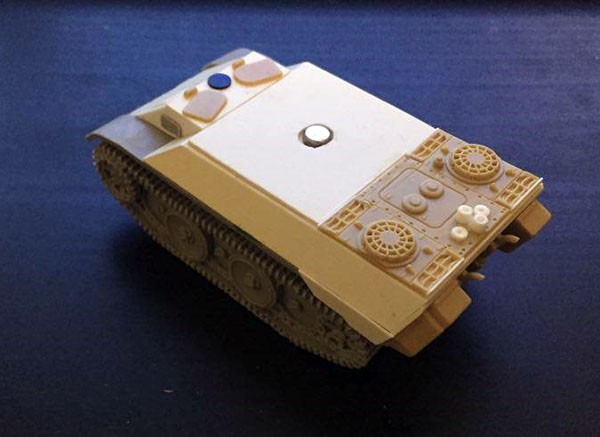 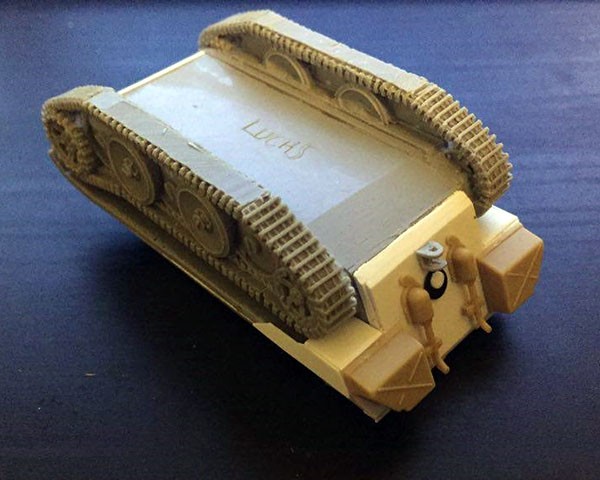 And so I finally ended up with my build completed. 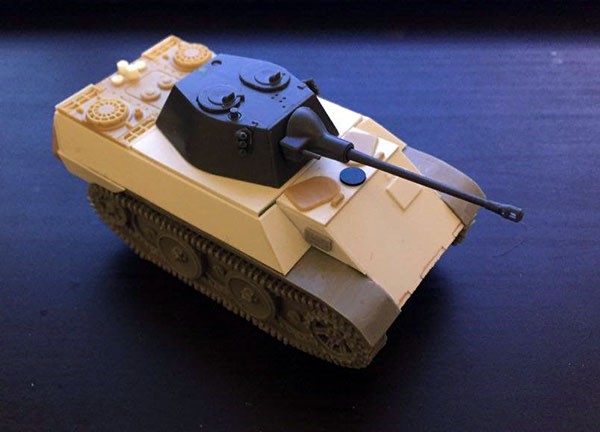 I then sent this little kitten halfway around the world to a very talented and skilled painter by the name of Patch, whom I believe many of you are already familiar with. If not then I urge you to go look at some of the other miniatures he has painted which can be found over at the Bolt Action Alliance facebook page (along with the work of some other very talented individuals). Finally here are some work in progress shots as well as the fully painted VK1602 tank. 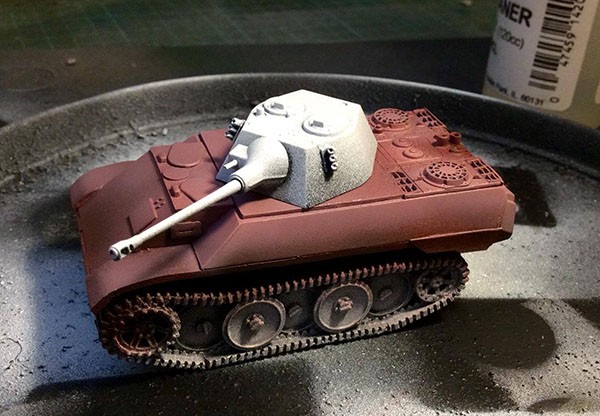 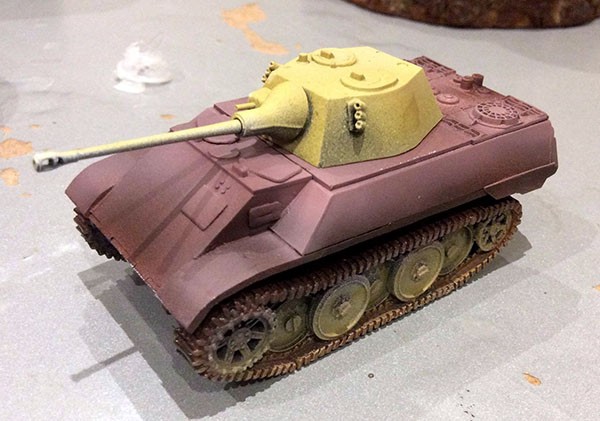 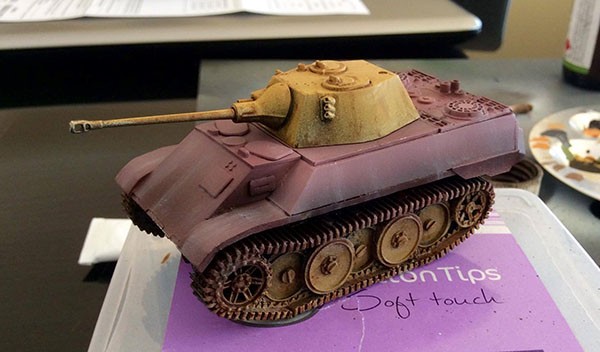 There are currently no rules for the VK 1602 but I would suggest using the following experimental ones (please note that these rules are meant for friendly games between two consenting individuals, they are in no way an official addition to the game).

On the tabletop it will most likely fulfill a similar role as the late Panzer III’s, giving you some good anti-tank capability in a tank with rather good survivability.

The ”It’s kinda dark in here…” special rule means that while the VK1602 has the Recce special rule this ability comes with some drawbacks, and if you are not careful with how you use it the tank may quickly cop a few pins… 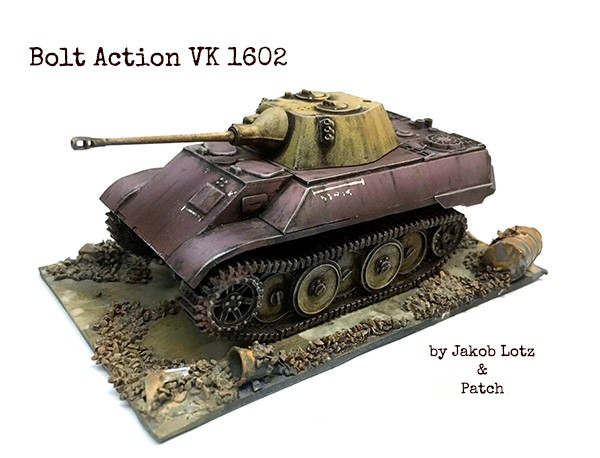 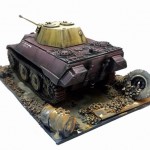 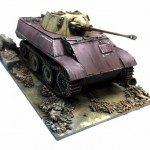 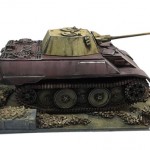 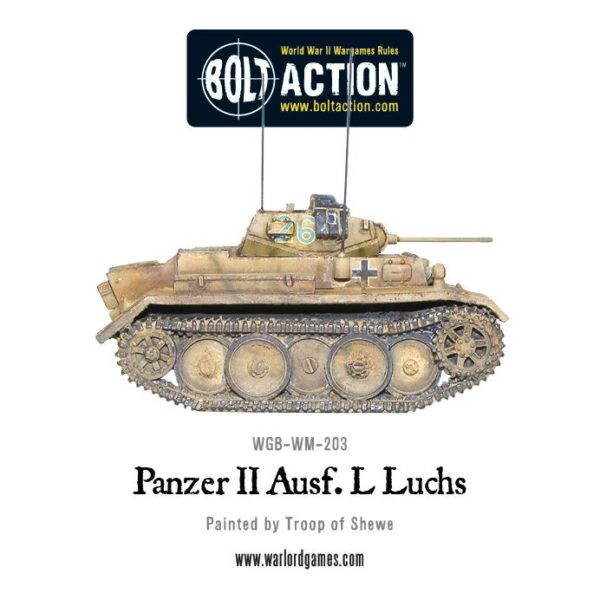 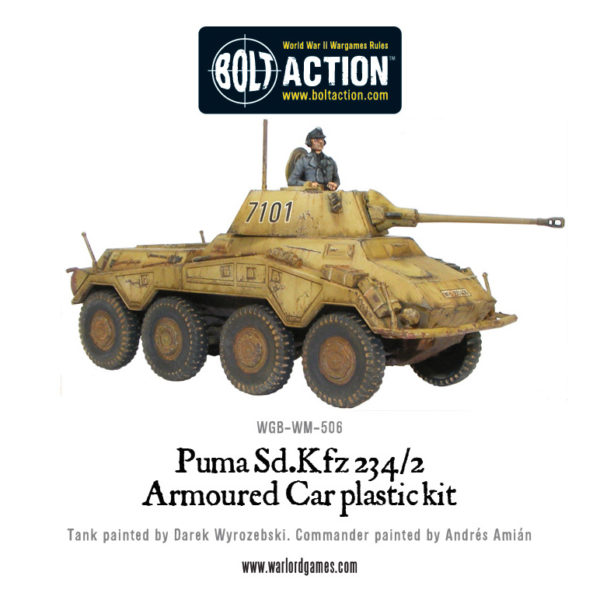