<strong>Late 22nd century</strong>. After the Atomic Wars of 2150, many survivors were warped by the Strontium 90 fallout. These ‘mutants’ became a victimised underclass, and the only job open to them was bounty hunting. One such Strontium Dog is <strong>Johnny Alpha</strong> whose mutant eyes allow him to see through solid objects and read brainwave patterns. <h3>The Strontium Dog Miniatures Game</h3> Strontium Dog is a skirmish tabletop battle game for two or more players set in the Strontium Dog universe defined by legendary comic creators John Wagner and Carlos Ezquerra. In it Mutant Search/Destroy agents – the Strontium Dogs – are bounty hunters in a dangerous universe full of outlaws, pirates and corruption. Their official sanction from the Galactic Crime Commission lets them operate across many worlds and jurisdictions – even time itself – yet they are hated and feared not just by the criminals they hunt but by normal people as well. Players take control of a small team of bounty hunters or the outlaws, criminals and renegades they hunt in gun battles, chases and showdowns across the galaxy.

The time-bending Johnny Alpha has made many excursions into the past to MC-1, putting him squarely in the sights of Judge Dredd. A mutant from Earth’s late 22nd century, Johnny…

Courtesy of Mantic Games and their awesome TerrainCrate range, you’ve got a great selection of modular plastic scenery suitable for any sci-fi tabletop games; ideal for 2000AD or Gates of…

Listen up you Sneckers! There’s a storm brewing at Warlord Games, and we need you to get creating simps to throw into the meat grinder! Judge Dredd is just around…

We’ve got some new arrivals stepping off the dropship this week, onto the Strontium Dog tabletops – introducing the Kreelers, and the New Mutant Army! In 2167, the teenage Johnny…

The rebellion is here! Destroy your oppressors and lead your people into a new age with the new Mutant Army Generals. View in Store Due to Government minister Nelson Bunker…

Deal out justice and keep criminals at bay with the new Strontium Dog Law Enforcement. View in Store With a badge on their chest, a gun by their side and…

With 2018 coming to a close we sought to round up some of our favourite releases of the year! January We started off 2018 with a bang with the Bolt…

Carlos Ezquerra was born in Zaragoza, Aragon. He began his career as an artist drawing western comics and war stories in Spain. In the early ‘70s, he was brought in… 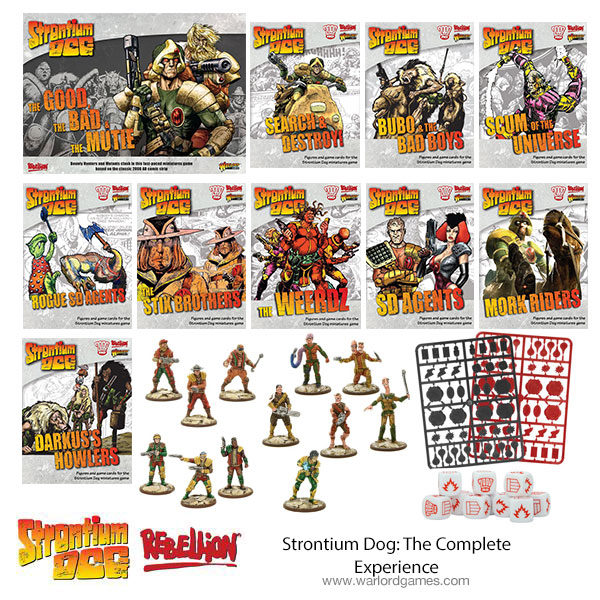 Containing everything you’ll ever need, this set has everything we offer for Strontium dog. Go ahead and get it all with the Strontium Dog Complete Experience! View in Store This…