On the evening of the 5th December 2013, a number of the warehouse team retired to Warlord Games co-founder John Stallard’s Games Room for an evening of Black Powder gaming on the edge of Zululand, to put the new ‘Zulu’ supplement to the test. Richard Dando reports…

Before first light on a muggy Saturday morning on the edge of Zululand, Sgt Stewart and his Natal Native officers stood atop a hill, looking down at the Zulu settlements below. Three small villages lay before them, with two animal corrals. The Zulu inhabitants were nowhere to be seen – fast asleep, not knowing of the British presence – and yonder, on the opposite side of the scene beyond the furthest village – Stewart could see heavy storm clouds pass.

The previous night had seen the area soaked in a cool rain, and the morning air lay humid before the sun had chance to rise. With the Zulus asleep, Stewart briefed his officers – relayed orders from the Brigade to launch a raid, reducing Zulu power in this area. Stewart also had instructions to gather extra provisions to supplement the Brigade’s dwindling supplies, and he had his eye on the scrawny cattle in those corrals.

The British objective was to set fire to as many Zulu huts as possible and to leave the board with as many cattle as they could. The Zulu objective was simply to stop them. 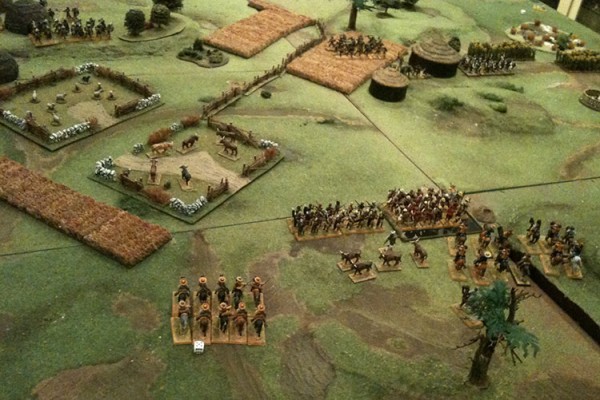 Turn one saw the first of the British forces advance onto the board – with all three infantry units advancing at full pace towards the central Zulu settlement. Accompanied by two units of cavalry.

They advanced swiftly and quietly, trying to approach unnoticed – with no shots fired, the Zulus remained asleep in their huts, unaware of what was to come. 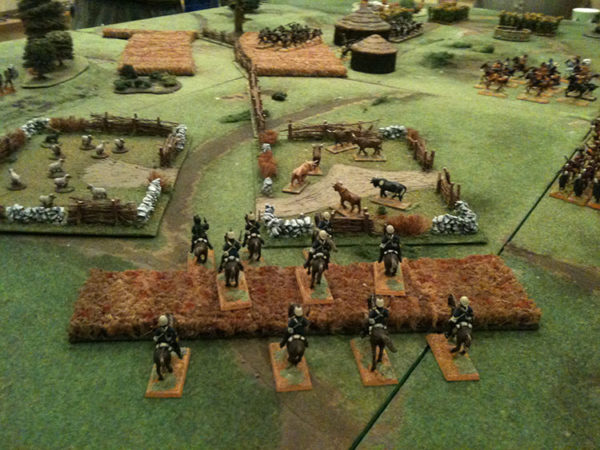 At the start of the second turn, a unit of Mounted Natal Police moved-up on the British left flank, aiming to seize control of the livestock corrals – moving fast, they soon secured a position among the low walls – however they’d disturbed the animals, and their cries awoke a unit of Zulus from the small village just ahead of their position! They stirred from their slumber, and took a defensive stance as they tried to awaken their neighbours in the face of their attackers – a war cry rang-out across the plain. With voices in chorus and the percussive thumping of shields on spear, the battlefield came to life. 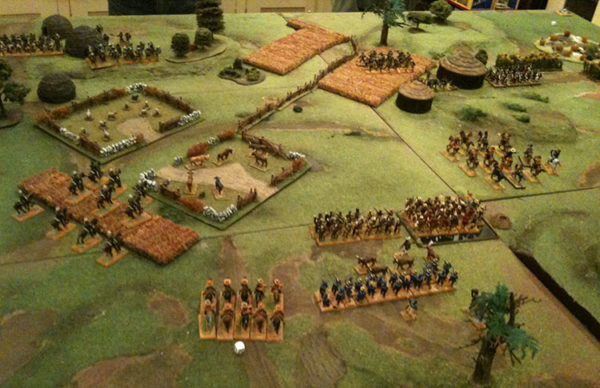 The central formation – featuring the core British infantry and two mounted units – continued their advance up the centre toward the main Zulu encampment, with rifles loaded and bayonets readied. 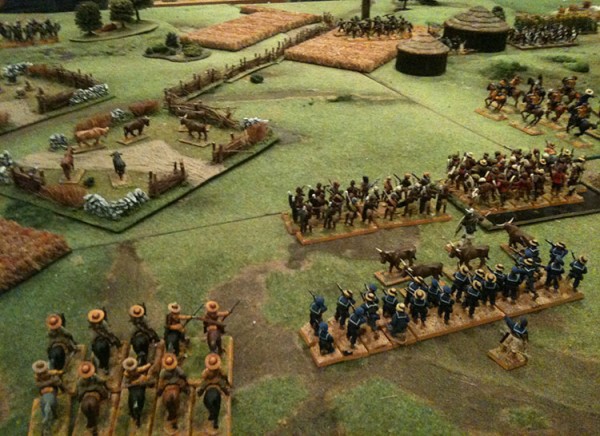 It was on the third turn that the tension truly broke – the Rocket Trough let rip a ferocious bombardment upon the roof of the nearest hut in the central Zulu encampment – the inhabitants awoke to face their attackers. Though the hut didn’t catch fire from the fiery missile, the noise was enough to wake the inhabitants – who ran outside and prepared a defence.

The British central formation – with their first sight of the enemy – continued a full advance, with a Natal Unit, the Traitor Zulus, and a unit of Naval soldiers piling-into the Zulus. This disturbance awoke two further Zulu units from their huts, and the clash in the centre of the table truly began.

On the left flank, the Natal Police dismounted among the animals, taking cover among the drystone walls in order to create a firing line to hold off the Zulus that had appeared from the smaller village ahead of them. 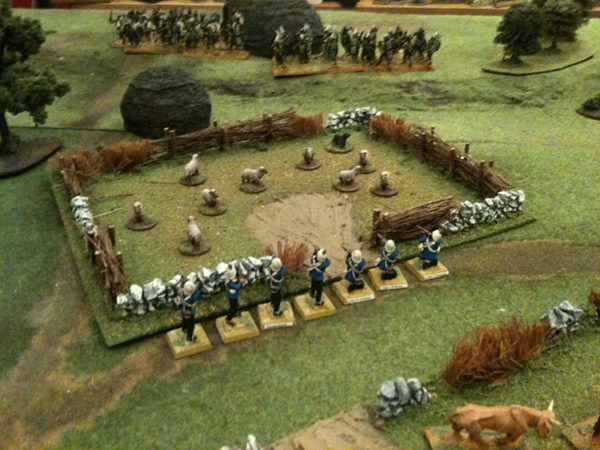 The fourth turn saw another thunderous volley from the Rocket Trough bombard the Zulu forces – this time, the crew set aim for the unit of Zulus in the smaller village to the British left flank. The projectile screamed high into the morning air, and crashed down around them – and though little damage was dealt, the alien nature of the weapon caused terror among the Zulu ranks. 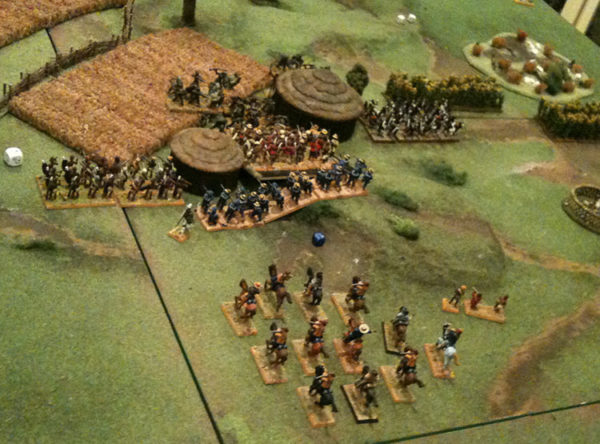 In the centre, the bitter fighting continued – the Natal, Traitor Zulu, and Naval British units were joined by the two mounted units who’d advanced alongside. They took position behind their comrades, ready to engage any counter-attack that might come – and in good time, as the awoken Zulu units were laying in heavy and among the chaos, a Zulu runner was seen desperately sprinting West, away from the battle. 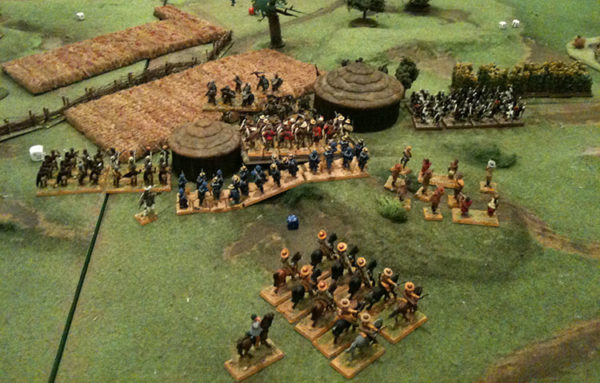 At the beginning of the fifth turn, it was apparent that the Zulu runner had reached a nearby Zulu encampment and called for reinforcements. A unit of the mighty Royal Guard with their signature White Shields came onto the board with a huge 36″ advance, leaving them directly behind their compatriots fighting in the middle village. The sheer presence of such a powerful and iconic unit caused the Zulus to fight with a renewed strength and ferocity as they traded blows with the Natal – however the force of the Traitor Zulu unit was all too much, and one of the Zulu units was soon overcome.

The Naval infantry repositioned, and lit torches were thrown upon one of the huts in an attempt to set it alight – however it was still damp from the night’s rain, and the fire didn’t catch. This act saw them charged by a further Zulu unit, and as they traded blows, casualties were taken on both sides.

On the left flank, another Zulu unit appeared from their huts – having been awoken by another (largely ineffective) barrage from the Rocket Trough. They, alongside the other small unit who’d appeared from their neighbouring hut, set forth toward the dismounted Natal Police among the livestock enclosures. The brave men of the Natal Police steadied their aim and took shots – felling a few of the Zulu number. 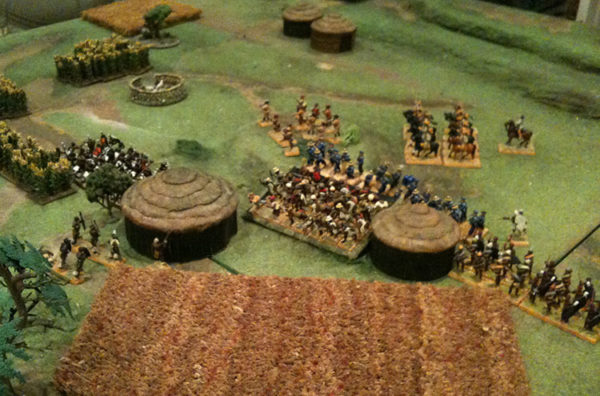 The remaining mounted British unit advanced to the right of the fighting among the central village. A unit of Zulu skirmishers had been sighted, and the British were determined not to let them take advantage of any potential flank charge.

The mass of units fighting in the centre ebbed and flowed, with British, Zulus, Natal, and Traitor Zulus attacking each other – the fighting saw multiple flank charges, with up to four units assisting each other at a time – it became one giant mass of bodies, with casualties falling in all units. Another torch was flung from the Naval infantry – but again the roof failed to catch light.

On the left flank, the two Zulu units who’d emerged from the small village ahead of the animal enclosures came thundering down the hill towards the brave, unbreakable men of the Natal police. With bold hearts and rifles readied, the Natal took to their horses and fled at full pace.

To the right flank, another clash – as two dismounted British cavalry units took position round a hill and opened fire upon the Zulu skirmishers who’d appeared – several Zulus falling in the process. 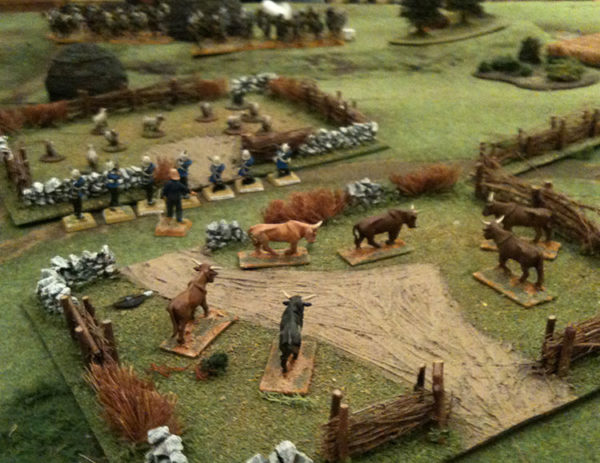 In the centre, the fighting continued. The Naval infantry managed to take down a further Zulu unit (though at a heavy cost to their own number), and though the fighting moved with a continuous chain of charges and counter-charges, with casualties falling on all sides, no definite winner could be determined. The White Shields lay-into the Natal and Traitor Zulu units, causing heavy casualties, however the Traitor Zulus stood their ground and dealt a hefty toll in return. The Naval infantry lobbed another flaming torch onto the hut roof (third time’s a charm…) but alas, once more it failed to catch light. The Traitor Zulus saw this, and through frustration snatched a torch from the Naval unit, throwing it themselves, and the building finally caught fire!

The Rocket Trough let loose another fiery salvo into the Zulus on the left flank, providing covering fire as the Natal Police – who had bravely taken to their horses and fled the threat of combat – advanced across the board.

The right flank saw the Zulu skirmishers advance further toward the dismounted British cavalrymen – the British once more took aim, and the skirmishers’ number was reduced further. 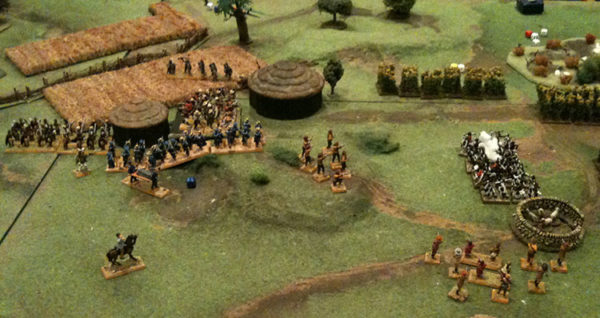 Fighting in the centre continued as charge made way for counter-charge, with units repositioning in an attempt to take advantage of flank charges. Casualties were taken by all, although the Naval infantry, who, despite being charged in the front and in both flanks, had only suffered light casualties and gallantly continued to fight. 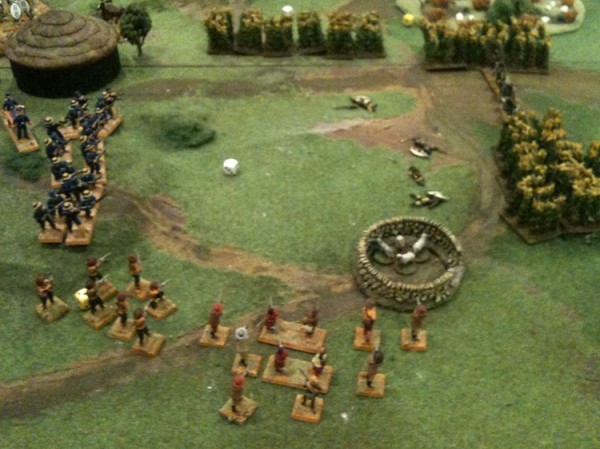 The first unit of dismounted British on the right flank let loose a volley and cut down the remainder of the Zulu skirmishers, while the second dismounted unit climbed back on their horses and sped towards the final Zulu village to their rear.

They were joined by the Natal Police who threw a flaming torch onto one of the village rooves, setting the hut ablaze.

Amid the chaos of the fighting in the centre, a lone Zulu unit had managed to sneak past the engagement, and had made their way towards the Rocket Trough – and with the last dice roll of the game, the Rocket Trough fell!

The battle had lasted but an hour, and as the first signs of morning light were peering over the hill to the East, Sgt Stewart looked back to see the silhouettes of two large black smoke plumes rising from the Zulu villages. Good men had fallen that morning, and though the cost was heavy – his men had also exacted a heavy toll upon the Zulus. Cattle-less, and with Zulu huts still standing, he returned to base pledging to muster a larger force and returning to the scene at a later date to finish the job…

At the end of the game, the British had managed to set fire to two of the Zulu encampments – however no cattle had been taken. All-in-all, it was decided that the game was a 6/4 victory to the Zulus – we’d managed to destroy two of their units, however they’d also exacted a heavy toll on our forces.

It was a fantastic game – very fun, very fast, and frantic! The new Zulu rules really bring Zululand to life on the gaming table, and I’m eager to return soon!