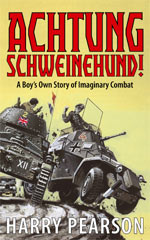 As described on Play.com:

“Achtung Schweinehund! is about men and war. Not real war but war as it has filtered down to us through toys, comics, games and movies.

It is about blokes who spend their leisure time dressing as Vikings, applying transfers to 1/32nd scale plastic models of armoured personnel carriers or re-fighting El Alamein with stacks of cardboard counters. Take a journey into a darkened backroom where HG Wells, a secret service assassin and the Bronte sisters rub shoulders with men called Dave who can identify 376 different WW2 camouflage patterns; a world where the apparent polar extremes of masculinity – brutal violence and the obsessive desire to memorise code numbers and create acronyms – co- exist peacefully in an atmosphere rich with the hallucinogenic fumes of polystyrene cement, cellulose thinners and bright orange corn-based snack foods.

ACHTUNG SCHWEINEHUND is a book for any man who can’t smell enamel paint without thinking of the Airfix 8th Army set, who remembers watching Rat Patrol, reading Battler Briton and playing Escape From Colditz. Or for any woman who has ever asked herself why the first thing most boys make from Lego is a sub-machine gun.”

A bloody marvellous read which anyone with even the remotest interest in wargaming past or present should be forced to read. No, we mean it – forced. At gunpoint if necessary – you’ll thank us for it after the nightmares stop…